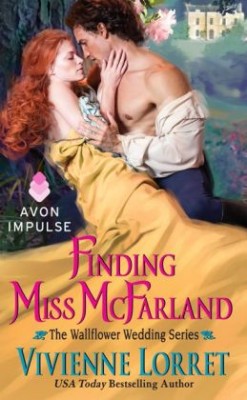 Delaney McFarland is on the hunt for a husband—preferably one who needs her embarrassingly large dowry more than a dutiful wife. After the unspeakable incident at her debut, Delaney knows marrying for love is off the table, but a marriage of convenience—one that leaves her free to live the life she chooses—is the next best thing, never mind what that arrogant, devilishly handsome Mr. Croft thinks. Delaney plans to marry for money … or not at all.

Ever since the fiery redhead burst into his life—in a most memorable way—Griffin Croft hasn't been able to get Miss McFarland out of his mind. Now, with the maddening woman determined to hand over her fortune to a rake, Griffin knows he must step in. He must help her. He must not kiss her. But when Griffin's noble intentions flee in a moment of unexpected passion, his true course becomes clear: tame Delaney's wild heart and save her from a fate worse than death … a life without love.

"Vivienne Lorret is now officially one of my favorites. She is on my auto-buy list. I love her writing style and the way she draws her characters. Her heroes are also not to be missed—and I don’t say this often---but her heroines are awesome too." - Grace, Books Like Breathing

"Lorret's spirited heroine is icing on the cake of this entertaining romance. This second book in the series (after Winning Miss Wakefield) features amusing dialog and secondary characters, resulting in a well-rounded story that is a must for all ebook romance collections." - Library Journal

For the first time in her life, Delaney stood perfectly still.

She didn’t move. Didn’t breathe. Didn’t even blink her eyes.

This couldn’t be happening. Griffin Croft wasn’t kissing her. He wasn’t lifting her to her toes in the middle of the conservatory, just steps away from the crush of the Dorset ballroom.

His warm, hard mouth slanted over hers. Wondrously heated breaths flared from his nostrils, igniting the air between them. Where his chin pressed into hers, she could feel the tiniest unshaven whiskers inside the deepest part of his cleft. Her breasts flattened hard against his chest, and the pounding of his heart felt like a fist threatening to break through a door. Only she was that door. Down the center of her back, his hand roamed. Fingers splayed, he touched every rib and vertebra as if committing her skeleton to memory. His exploration continued until that hand settled into the dip just above the rise of her derriere. And then, he drew her even closer.

The crackling that possessed her every time Griffin Croft was near burned hotter than before. Instead of pinpricks of heat, tiny flames licked over her flesh, threatening to char every inch. This time, she didn’t mind in the least.