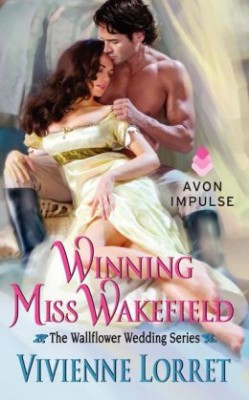 She's got nothing left to lose …

With her fiancé suddenly engaged to another and her reputation in tatters, Merribeth Wakefield needs a bold plan to reclaim her life. She must be brave. Confident. She must … kiss a rake? The suggestion is ludicrous! Yet when Merribeth finds herself alone with the dark and brooding Lord Knightswold, suddenly the plan doesn't seem so farfetched. So she does something she never thought she'd do—she kisses him.

But he has everything to gain …

The Marquess of Knightswold—Bane to most—has no use for the affections of women. Well, none lasting longer than a single night. A plot for revenge weighs heavy on his mind, leaving no room for romance. But then a shy, witty miss borrows a kiss from him in a darkened room, and everything he thought he knew about innocent debutantes vanishes along with her.

When a twist of fate brings Merribeth within Bane's grasp, he'll have to resist her charms—or risk losing everything—for the sake of his heart.

"SO GOOD. Unputdownable! This is the author you’ve been waiting for!" - New York Times Bestselling author Sophie Jordan

"Winning Miss Wakefield earns a 10 out of 10 from me. It made me laugh, cry and fall in love all at the same time. Its truly is the best Historical Romance Series I have read this year." - Brit Nanny Reads

He had been thoroughly distracted by Miss No Name, Miss Sign of Venus, as she ran her fingers through his hair. It felt heavenly. Wondrous. Divine. How long had it been since a woman had simply stroked his hair? Though he’d never admit it if asked, this was one of life’s greatest pleasures.

Closing his eyes, he’d trusted this stranger more than he had anyone in years, and he couldn’t put reason behind it, only the instinctive sense he’d come to rely upon. He was good at figuring people out, which was why he preferred the company of horses.

Then, a shadow had crossed over his face, accompanied by a hushed rustle of silk. Drowsily, he opened his eyes to see her gazing down at him. Her soft fingertips petted the shorter hair at his temples and followed the line of his whiskers to the lobes of his ears.

He’d opened his mouth to tell her that he’d willingly pay her five hundred pounds per annum if she’d never stop, but she shushed him with a shake of her head.

“Don’t say a word . . . please,” she’d whispered, leaning closer. “I only mean to borrow this for a moment and return it directly.”

Then she’d lowered her mouth to his.