The Rogue to Ruin 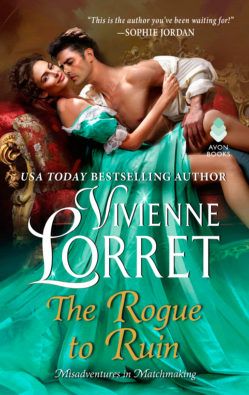 The Bourne Matrimonial Agency has one rule: Never fall in love with a client, which shouldn't be a problem when one’s faking an engagement to the rogue across the street…

Ainsley Bourne needs the family business to succeed. But one obstacle stands in her way—Reed Sterling, the huge, handsome, former prize fighter and owner of the gaming hell across the street. His scandalous customers scare off all her marriage-minded patrons and since the devilish brute has no intention of relocating, she sets out to ruin his unsavory establishment. Yet when a vile suitor from her past reappears, Ainsley hastily claims an attachment to the first man who comes to mind... Mr. Sterling, to be exact.

Reed doesn’t know who is more surprised by Miss Bourne’s declaration. She clearly hates him, and he'd never admit their arguments simmer with unrequited attraction. Something about the pleading look in her eyes calls to Reed, and against his better judgment, he quickly plays the part of the besotted fiancé.

Pretending to be in love requires a convincing charade. But with each tantalizing touch and every scandalous kiss, Ainsley starts to wonder if Reed was ever really the enemy at all.

"The third Misadventures in Matchmaking series title is just as delightful as the first two, with a slightly darker subtext that only makes its effervescence more uplifting. Another clever, charming historical romance from Lorret." - KIRKUS Reviews

"An enemy to lover's tale that doesn't disappoint!" "THE ROGUE TO RUIN has plenty of action to keep the story going and keep the reader (like me!) entertained throughout. I can’t wait to read Vivienne Lorret’s next title!" - Fresh Fiction, Jessica Grogan

"this book was so much fun. i loved the characters and their button pushing was the best. also, the chemistry was unbelievable. i was constantly wanting to mash their faces together. i know this will be a book i read again." - too fond of books, 5 stars

“Viv Lorret is up there with Sarah MacLean and Lisa Kleypas on my historical auto-buy list!” - Lauren Layne, New York Times and USA Today bestselling author

"Definitely one of my favorite couples this year. In fact, The Rogue to Ruin has earned a spot on my best reads of the year list." -Adria's Musings

"I loved Reed throughout the book. He was large, strong, smart – and a marshmallow on the inside." - Flippin' Pages Book Reviews

"THE ROGUE TO RUIN has sexual tension galore, a villain to loathe, and a romance to root for. Fans of Lisa Kleypas will adore Reed." Fresh Fiction, Miranda Owen

“filled with delicious, fiery dialog between Ainsley and Reed... a satisfying conclusion to a clever and engaging series." -Library Journal

“I hardly need your advice,” Ainsley scolded him in return, every word pushing her flesh against his. Almost as if… as if she had just kissed him.

But this wasn’t kissing, she assured herself. This was merely a new form of arguing.

Anticipating his next contradiction, she angled her head for closer contact and Reed growled in response. The low, primal sound sent an unexpected thrill rushing through her.

“It would be a waste of breath to tell you anything,” he said, fitting his other hand over the curve of her cheek to cradle her face. “Even if I wanted to say that your lips are soft and plump and more luscious than wine-poached pears, I wouldn’t.”

Then he tilted her head back to cement his argument. Opening her mouth with his own, he nibbled gently into her flesh, tasting the seam of her lips without hurry. The slow, thorough exploration caused her eyes to drift closed.

Her senses centered on the firm, enticing pressure of his mouth, the delicious rasp of his tongue. A wanton mewl tore from her throat, hungry and needy and urgent.

The unguarded sound brought her to an uncomfortable admission . . .