The Rakes of Fallow Hall Book 2 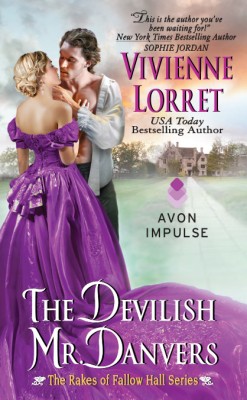 For the first time in her life, Hedley Sinclair holds the keys to her own future. She's inherited the crumbling Greyson Park, but the disrepair does nothing to dissuade her. No one will ever lock her up again or attempt to take away what's hers. No one except Rafe Danvers—the charming, fiendish man from Fallow Hall. He's determined to claim Greyson Park, but if Hedley isn't careful, he'll claim her heart as well.

Rafe has every intention of ridding Greyson Park of the conniving Sinclairs once and for all. The last thing he expects is to find the beguiling Hedley—the younger sister of his former fiancée—standing in his way. With drastic measures called for, he plans to marry her off in order to regain control of the estate. The only trouble is, he can't seem to stop seducing her. Even worse, he can't help falling in love with her.

"What starts out as a battle for the property turns into a battle of the heart. And this is Lorret’s finest thus far." - Tanya Kaanta-Heroes and Heartbreakers

"There’s humor, witty and fascinating dialogue, and just the right amount of emotional drama to keep a reader engaged page after page... Grab a copy and enjoy the ride." Xeranthemum, Long and Short Reviews

“A young woman in society usually flirts when given the opportunity.”

How was she supposed to flirt when she could barely think? He stood close enough that she could feel the alluring heat rising from his body. She drew in a breath in an effort to think of a response. When she did, however, her nostrils filled with a pleasant scent that only made her want to draw in another breath. It was his fragrance. From their previous encounter, she recognized the woodsy essence and a trace of sweet smoke.

Hedley caught herself rocking onto the balls of her feet to get closer, but then quickly fell back onto her heels. She swallowed, her throat suddenly dry. “I am not in society. Nor am I likely to be. Therefore, I have no reason to flirt.”

“You don’t need a reason.” He leaned in, his voice low. The angular cut of his side- whiskers seemed to direct her gaze toward his mouth. “Flirting is a skill. You use it to get what you want.”

Hedley forgot why she’d come here. …to get what you want…

The more she stared at Rafe’s mouth, the heavier her eyelids seemed to weigh. Why was she suddenly so tired? Perhaps it was too early to pay a call. Or perhaps it was because he stood so close that his warmth blanketed her. It would only take a single step to rest her head against his shoulder. “Like a type of currency used in society?”

“An astute observation.” He grinned.

She was definitely out of her element. The least she could do was try to keep her wits about her. “Then, I should assume that you want something from me.”

He moved closer, but she dared not imagine that he was under the same trance. No, he was far too skilled in the ways of society for that.

Even so, the curve of his knuckles brushed her cheek. “What shade of pink do you suppose this is?”

“And that was a terrible change of topic.” Believing that he was speaking of one of the colored glass vases in the cabinet, she looked them over. She found deep red, the color of merlot, a blue vase, bright and clear as a summer sky, and daffodil yellow, among other hues. “Besides, I see no pink.”

“No, this color. Here.” His thumb caressed her cheek, his fingers settling beneath her jaw.