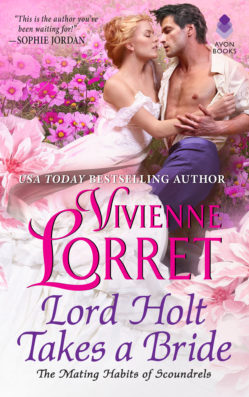 USA Today bestselling author Vivienne Lorret launches a charming new trilogy about three debutantes who get more than they bargained for when it comes to the mating habits of scoundrels...

Heiress Winnifred Humphries refuses to marry the odious man her parents have chosen. She’ll marry for love or not at all. But how does a woman know a man truly loves her? Needing answers, she sets out to discover the marriage habits of London’s aristocrats. Yet when her friends kidnap a lord for research, Winn knows they’ve gone too far. Now she’s facing a wickedly handsome scoundrel who wants revenge.

Lord Asher Holt has the perfect plan to free himself of his father’s debts. But when a trio of foolish debutantes abduct him, their scheme ruins everything! Fuming and tied to a chair, Holt overhears that one of them is an heiress. Perhaps he isn’t above a little kidnapping either.

Yet, when the heiress runs away from her own wedding and straight into his waiting carriage, Holt finds himself on an adventure he’ll never forget, falling in love with a woman worth more than any treasure. But will Winn ever believe his heart only desires her… and not her fortune?

“Asher and Winn are endearingly complex characters with wit and chemistry to spare. Romance readers will be delighted.” Publishers Weekly

"A solid Regency romance and promising start to a new series. " Kirkus

“I love Viv’s humor and analogies. I spent a good deal of my time smiling as I read the story . . . it was a lovely confection.” New York Times and USA Today bestselling author Lorraine Heath

"Lorret debuts her new the Mating Habits of Scoundrels series with a whimsically winning Regency-set historical that deftly plays with popular romantic tropes such as the runaway bride with great success. Readers who crave love stories generously dusted with plenty of fairytale charm, flirty wit, and fun sensuality will find this hits their reading spot. " Booklist

"A title so nice, I read it twice." Fresh Fiction

"Lord Holt Takes a Bride is a light-hearted romantic literary romp that is certain to have you smiling throughout!" Red's Romance Reviews

"...a lovely, fun story with enough mystery and drama to keep you reading until the very last page!" Romance Junkies

“Winn, this isn’t the time to be shy,” Asher said from the base of the ladder. “Toss down your dress.”

She blushed to the roots of her hair. Unfortunately, even turning crimson wasn’t enough to warm her frozen fingers and stop her teeth from chattering.

“You’re quite right. Therefore, there’s no reason to stand upon ceremony.”

Before she could ask what he meant by that, the top of his head emerged over the edge of the loft. She might have gasped at his audacity, but then the rest of him came into view and her mind whirred to a sudden stop.

Well, mostly. His bare, broad shoulders and sinewy arms appeared first, muscles shifting and bunching beneath his skin as he navigated the final rungs—and far more adeptly than she had done. Then he unfolded from a crouch, and stood.