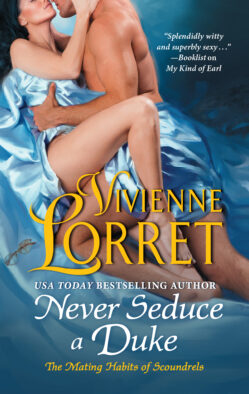 After being jilted, Margaret Stredwick has sworn off men and marriage. What she needs is a holiday. But a detour along the way takes a surprising turn that leads Meg to him. And soon she starts to wonder if she should indulge in one grand flirtation before she’s firmly on the shelf.

The instant Lucien Ambrose, Duke of Merleton, finds a strange woman touring the halls of his ancient estate, he knows the minx is up to something. So, when a family heirloom is stolen, it’s clear who the culprit is. She may tempt him beyond reason, but he isn’t about to let her get away, even if he has to chase her across the continent.

Meg never imagined that anyone would mistake her for a notorious thief, known for seducing men to distraction. It’s the most thrilling thing ever! She eagerly plays along. . . until she finds herself falling in love with a man who has no idea who she really is. And by the time she returns to her ordinary life, she discovers that her grand flirtation won’t be a secret for long. Apparently, she brought home an unexpected souvenir...

"Lorret's sparkling characters...light up the pages of this un-put-downable tale. Historical romance fans will be captivated..." Publishers Weekly, Starred Review

It wasn’t until then that she realized her hand had somehow found his chest. And this wasn’t the first time.

She withdrew it at once. “I don’t know why I am forever touching you.”

He took that same hand and curled it around his telescope, the instrument substantial and weighty. Then he turned her by the shoulders and pointed toward the constellation. “I should think it quite obvious.”

“Oh?” She lifted the eyepiece to search the heavens.

Then she felt him behind her, warm and solid as his arm slid along hers to guide her toward the occultation. “You are attempting to seduce me.”

Seduce him? Her heart lurched, then beat faster as she abruptly remembered her role as Lady Avalon. Honestly, she had no idea how to behave like an adventuress. And yet, apparently, she must have been doing something right.

“Flirting. Only flirting,” she clarified. “There will be no seduction from my quarter.”

“No? So you’re not trying to tempt me with every look and light caress?”

As he spoke, he adjusted her hold on the instrument, his large hand covering hers. His other settled on her waist as if to steady her. When she shook her head, the tip of his nose stirred the downy curls that dangled against the side of her neck, sending a frisson of excitement through her, and she wondered who was seducing whom.