My Kind of Earl 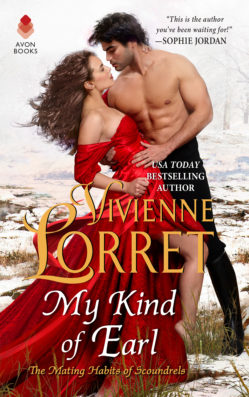 USA Today bestselling author Vivienne Lorret continues her charming new trilogy with a bluestocking whose search for information on the mating habits of scoundrels has her stumbling upon the missing heir to an earldom... in the London underworld.

Jane Pickerington never intended to start a brawl in a brothel. She only wanted to research her book. Yet when her simple study of scoundrels goes awry, she finds herself coming to the rescue of a dark, enigmatic stranger… who turns out to be far more than an average rake out for a night of pleasure. He’s positively wild!

Only the most feral and cunning could have survived foundling homes and work houses. Orphaned as an infant, Raven never had another name. At least… not until he meets her. Now he’s face-to-face with the one person who recognizes the strange birthmark on his arm and can reinstate him to his blue-blooded birthright.

All at once, Raven’s life takes a turn. His knowledge of dark alleys and gaming hells never prepared him for gilded ballrooms. So Jane becomes his tutor. Yet, the more lessons in decorum she offers, the more this untamed scoundrel wants to teach her all the ways to be wicked.

In response, Raven’s gaze heated in a sudden flare, simmering to smoke as it rested on her mouth. Her lips tingled under his scrutiny.

As if he knew this and wanted to soothe her, the pad of his thumb skimmed that tender surface too. “I bought a new book the other day.”

The alteration in topic was unexpected. And yet, no other man could make such a statement sound so intriguing and so wicked at the same time. “What is the title?”

“Can’t recall,” he said mysteriously, stepping closer until his hip brushed her knee and the lamplight seemed to burn in his eyes. “Come upstairs with me and we’ll read it together.”

At once, she knew what he was doing and she covered his hand with her own, drawing it away from her blushing cheek.

“You are such a scoundrel,” she said, but there wasn’t even a hint of scolding in her breathless voice. Temptation, perhaps. But not scolding. “Why is it that whenever we’re talking about your identity, you try to distract me with seduction?”

He flashed an unrepentant grin, and didn’t even bother to deny it. “One is far more interesting than the other.”