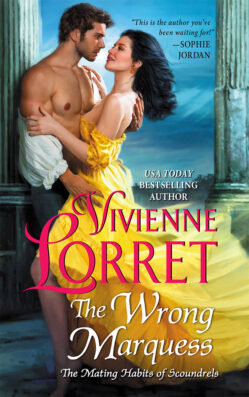 USA Today bestselling author Vivienne Lorret continues the Mating Habits of Scoundrels series with a debutante who believes she is destined to marry the lord next door until a fateful encounter with a rogue makes her wonder… if she might be falling for the wrong marquess!

Elodie Parrish can feel spinsterhood breathing down her neck. That’s the trouble with waiting for the marquess next door her entire life. But Ellie knows if she gives him one last Season, he’ll finally propose. The only problem is, her path keeps crossing with the arrogant Lord Hullworth, who is convinced she has designs on him.

Brandon, Marquess of Hullworth, never wanted to be “London’s Most Elusive Bachelor,” or have a horde of hopeful debutantes and their scheming mamas follow him around. His past has left him too jaded to consider marrying any of them. At least, that’s what he thinks... until he meets Ellie. She’s quirky, opinionated, blushes easily, and drives him absolutely wild. The only problem is, she believes she’s in love with someone else.

Ellie never imagined that one sultry summer could change everything. But the more time she spends with Brandon researching her book on the mating habits of scoundrels, the more she wonders if she might be falling for…

"Lorret’s writing sparkles, as ever, with delicious banter between Ellie and Brandon and clever writing throughout... A witty, classic Regency romance." Kirkus Reviews

"Sparkling... Readers will be eager for the next installment." Publishers Weekly

"THE WRONG MARQUESS beautifully captures the magic of mutual attraction and is equally amusing and romantic." Fresh Fiction

"This book had me laughing from the first page until the last!" Lady with a Quill

"...romance with plenty of sizzle and wit that made it hard to put down." Novel Knight

"Brilliant storytelling from beginning to end, ensuring that The Wrong Marquess will definitely be placed on my "Read it again" check list." Betty Loo's Reviews

"Vivienne Lorret has done it again! The Wrong Marquess is a five-star romance regency romp!" The Romance Dish

“This way, Miss Parrish. I don’t wish to alarm you, but our friend seems to be following us. It must be how fetching you look in yellow.”

Ellie tried to focus on her steps and not look at the alarmed faces of the people staring in horror at what was directly behind her shoulder. But she could feel her blood turn colder, her limbs stiffening, her hand numb around the handle of the parasol.

He chuckled as if he thought her jesting. “No need to fret. Just think of this as having your own personal guide through the zoological gardens. Ah, here we are passing the parrot exhibit. They’re in fine feather today. And next we’re approaching the giraffes. Would you like to stop there on your pell-mell tour?”

She cast a wary glance toward the pair of tall spotted animals as their heads tilted, following her every movement with their large dark eyes. “Please don’t. Quite honestly, I stayed awake half the night worried about something terrible happening . . . like being eaten by a giraffe.”

“I believe they are herbivores.”

“Sure, that is what everyone thinks. But how does anyone really know? Have you ever asked a giraffe if he wouldn’t prefer a filet of beef over a bowl of lettuces?”

“Now that you mention it, no, I have not,” he answered, his tone light with amusement just as he darted behind one of the brick shelters. Stopping for a moment, he peered around the corner, still holding her firmly at his side. Then he set her on her feet. “The little beastie turned off in another direction and there’s an army of caretakers right on his heels. We should be safe here for a moment or two.”

“No one . . . can promise that. Especially not you. Why, you cannot even protect yourself from husband hunters.”

Ellie leaned stiffly against the support of the brick wall at her back, her lungs tight from oxygen deprivation. First, it was death by trampling, and now by suffocation. Either way, she was never going to make it out of the zoo alive.

Her body would likely be picked apart and eaten by carnivores and supposed herbivores alike. At her funeral, her aunts would wail and mourn and surely demand that a bench be erected in her honor for all who visited this terrible death trap. A bench, so that future victims could be presented on a convenient platter, instead of forcing the animals to chase after them..

Lord Hullworth set the crook of his finger beneath her chin and tilted up her face for scrutiny. Then he frowned. “You really are afraid, aren’t you?”

Much to her dismay, she felt the mortifying prickle of tears behind her eyes. “Only of dying . . . and of all the things that cause one to die prematurely . . . and of being closed in a coffin . . . with heaps and heaps of dirt and worms shoveled on top of me. I know it’s irrational but I can’t seem to help it.”

“Miss Parrish,” he said softly. “Nothing is going to hurt you. I won’t allow it.”

Ellie had no idea how he could make such a promise, or why he felt the need to take hold of one of her hat ribbons as he had done early this morning. This time, he tugged the knot free. Blinking up at him in question, she wondered at his intent as he eased her hat away and let it fall to the grass beside them. Her gaze followed the bonnet where it rested on the ground.

“There now,” he crooned, gathering her in his arms.

A shuddering sigh left her as he pulled her rigid body against his solid form. Not too far off in the distance, chaos ensued. She could hear the bleats of the elephant, the quick padding of footsteps on the path, men shouting and a few female shrieks.

But here in the shelter of his embrace, her focus lingered on the steady drumming of the heart beneath her ear. The warm breath that drifted across her temple. The splayed hands stroking down her shoulders and along her spine in a soothing rhythm, coaxing the air back into her lungs.

She inhaled deeply. Beneath the faint fragrance of the collective horde’s cloying perfumes, she found his scent. How peculiar that it was already familiar to her. And he smelled exceptionally good. The combination of cedar, fresh linen and spicy clove—perhaps from his shaving soap—blended together with the heat of his body to form a heady elixir that made her drowsy and relaxed.

She melted against him, forgetting about the rest of the world. In her mind’s eye, she pictured the two of them huddled close together in the middle of the zoo, barely hidden from the crowds. It would be scandalous if they were caught. And yet she couldn’t summon any desire to separate herself from him.

“How is your limb faring?” Lord Hullworth murmured, the vibration of his voice tunneling warmly inside her.

“If you want the truth,” she said gravely, “at the moment, I’m not certain that I still have limbs.”

Her entire being seemed comprised only of the portions pressed to him—her cheek, stomach, breasts, hips. He eased back marginally and began a careful assessment. Nothing untoward. And yet, she gradually became more aware of other parts as if she was being reanimated into being by the brush of his hand on her hip, his palm trailing upward along her side to her shoulder, and his tactile fingertips skimming over the fragile curve of her neck to settle gently beneath her jaw.

He must have removed his gloves, for she felt the touch of his skin against her own, welcome but also startling in the way the sensation fizzed through her.

He lifted her face, those gray-green eyes studying her with the close inquiry of a physician gauging the severity of this new ailment. “You’re still quite pale. Are you in any pain? Did I jostle you too roughly during our escape?”

“No,” she said at once in reassurance. “You’ve done nothing wrong. It’s just . . .” She felt her brow pucker in bewilderment over these foreign sensations. “I’m strangely light-headed and buoyant. And I don’t wish to alarm you, but the blood in my veins feels rather effervescent, like champagne bubbles in a fluted glass. My bones are as insubstantial as feathers.”

She felt a coil of tension roll through him at this, his pupils expanding in spills of inky black. He crowded ever closer as if he feared she would float away on the barest breeze.

“And is your pulse racing?” He didn’t wait for her answer. Instead, his fingertips drifted down to the quick hummingbird wingbeat at the side of her throat. “And has your mouth gone dry just now? Your lips plump and tender?”

She nodded, mystified. “You’re very good. Doubtless, you could have become a physician. Do you think we should summon Doctor Lockwood?”

“No. Lockwood cannot help you with this,” he said, his tone edged with a low growl that left her to wonder if this was far more serious than she thought. Before she could ask his opinion on her chances for survival, he leaned in and said, “Only I can.”

And then he eased his mouth over hers.