THE MADDENING LORD MONTWOOD will be released one month from today!! YAY!!! And since I’m really terrible at waiting, I thought I’d post a sneak peek into Lucan and Frances’ story. 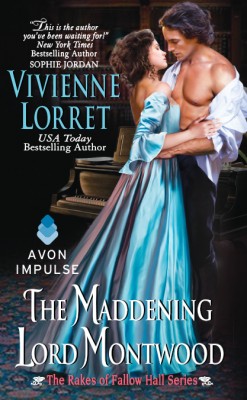 “While I admire the stern workday countenance you employ to set an example for others, using a little smile in the market could do wonders for your basket.”

He was talking about flirting. Flirting was one thing Frances never did. She’d seen how a friendly smile could give a man the wrong ideas. In her opinion, it was far better to know the character of the man beforehand. “I suppose you would have me remove my spectacles and bat my lashes as well.”

Lucan turned to face her. Slowly, he revealed a grin that only hinted at the dimple lurking there. It hinted at other things too. Scandalous things. She was certain of it because a ripple of desire stirred inside of her.

“No, Miss Thorne, always wear your spectacles.” He leaned forward, the brim of his hat close to hers. “They act like a veil, making a man wonder about the eyes behind them. A man starts to imagine being the one who’ll steam up your lenses.”