A Christmas to Remember 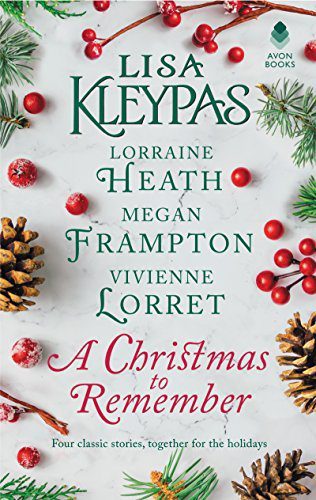 Romance stars Lisa Kleypas, Lorraine Heath, Megan Frampton, and Vivienne Lorret prove in this collection of stories that love is the most magical during Christmas…

"I Will" by Lisa Kleypas

To be reinstated into his father’s will, Andrew, Lord Drake, must court a respectable woman-his friend’s spinster sister, Miss Caroline Hargreaves. After he blackmails Caroline into helping him, the charade begins-but is it really a charade once love takes hold of their hearts…?

"Deck the Halls With Love" by Lorraine Heath

Alistair Wakefield, the Marquess of Chetwyn, devastated Lady Meredith Hargreaves when he proposed to another. But when he becomes free to pursue her, it’s too late for she’s on her way to the altar….. As Christmas approaches, Chetwyn vows to lure Lady Meredith back into his arms.

"No Groom at the Inn" by Megan Frampton

James Archer detests his mother’s matchmaking ways. When ordered to attend a Christmastime house party filled with simpering maidens, he produces a fiancée-Lady Sophronia Bettesford. James and Sophronia pretend to be in love for one month. But their pact soon turns into love.

To the Duke of Vale, science solves everything-even marriage. When the impulsive Ivy Sutherland makes him question all of his data, he realizes that he’s overlooked a vital component in his search for the perfect match: love.

from THE DUKE’S CHRISTMAS WISH

By the time he cleared his head, Miss Sutherland was taking a few hurried backward steps. When she turned around, she ran headlong into him with a surprised Oh! and then an oof!

North stumbled back into the ascending room. He did everything he could to remain upright. Planting his feet wide, he was forced to hold her against the sturdy column of his body. Forced to grasp her arms. Which, incidentally, were bare between her velvet-trimmed cap sleeves and elbow-length gloves. Bare beneath his hands. Bare, warm, and softer than goose down.

A shudder—that was more about untamed desire than preoccupation—quaked through him to his very core. Staring down into her almond-shaped eyes, he watched as they widened and swept over his features, from brow to chin. Her gaze lingered a fraction longer on his mouth, as if she was waiting for him to speak or, perhaps, waiting for him to kiss her.

He took a moment to speculate whether it was the former or the latter. In the seconds that passed, he catalogued how her hands were resting against his chest, not pressing as if she wanted to gain her freedom but curled slightly as if trying to capture the beat of his heart in the cup of her palms. Also, she made no movement to separate from him. Her breathing was rapid—though perhaps that was the result of running down the hall. When she wet her lips, however, she provided an irrefutable answer.