When a Marquess Loves a Woman 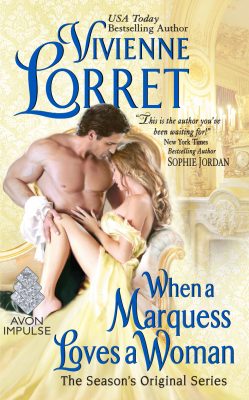 As a young, penniless gentleman, Maxwell Harwick knew he had little to offer Juliet White—the most beautiful debutante of the season—except his love, and one thoroughly scandalous kiss. But when they were discovered in a compromising position, a nearly ruined Juliet fled into the arms of a rich, older lord... taking Max’s heart with her.

He hates her for breaking his heart. She detests him for destroying her future. But beneath all the loathing, simmers an intoxicating passion that neither can ignore… and the harder they resist, the harder they will inevitably fall.

"You never want to put it down." Isha Coleman, I Love Romance

"When a Marquess Loves a Women is a beautiful book, that is very easy to fall into and never want to leave." Cara's Book Boudoir

"...the passion between these two simmers." I Am Indeed

"WHEN A MARQUESS LOVES A WOMAN is a sexy and delightful read..." Roses Are Blue

"This story has it all..." Travelogue of a Book Addict

"...a wonderfully fun historical romance that will capture the readers attention from page one..." Lisa Filipe, A Tasty Read Book Review

"This is the author at her best. Five-plus stars. ♥" Jen Valencia, Dog-Eared Daydreams

"It will melt your heart." The Romance Dish

"...a beautiful regency." Romancing the Book

"It’s got all my prerequisites for a good Regency romance–loads of sexual tension, a heroine who owns her shit, and epic sass-battles. Also canoodling in libraries. " Elyse, Smart Bitches, Trashy books

"If you enjoy a fun, emotional historical romance I highly recommend When A Marquess Loves a Woman." Forget the Housework, I'm Reading