This Earl Is on Fire 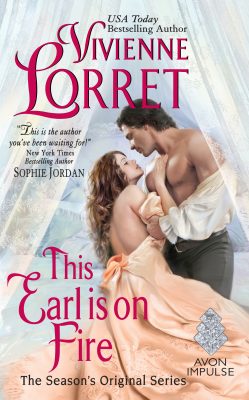 Liam Cavanaugh, the scandalous Earl of Wolford, is startled when he awakens in an unfamiliar bed, wrapped in bandages that hinder his eyesight, with no memory of why he was beaten half to death. Although he can’t see the witty young woman who tends to his wounds, her alluring voice—and a single stolen kiss from her soft lips—help soothe his pain. But when he is fully healed, Liam is not ready to let go of the one woman who stirs his deepest longings.

"Ms. Lorret blends adventure, suspense and seduction into a story of love that has unforgettable written all over it." Isha Coleman, I Love Romance

"Lorret continues to prove that she is a talented story teller who brings the magic back to historical romance!" Lisa Filipe, A Tasty Read

"This Earl Is On Fire is no less than Historical Romance perfection." Frishawn Quinn, WTF Are You Reading

"...I've found myself a go-to author in the form of Vivienne Lorret." Jen Valencia, Dog-Eared Daydreams

"This Earl is on Fire is a captivatingly, deeply passionate, roller coaster of a read. This story is well deserving of 5 stars." Janet Greaves, Teatime and Books Reviews

"An outstanding historical romance with wonderful characters and a captivating plot ..." Jaci Tobin, The Reading Wench

"If you enjoy a sensual tension filled, spicy regency romance with a touch of mystery and a bit of humor in all the right places, I highly recommend This Earl Is On Fire." Tobi Helton, Forget the Housework, I'm Reading

"I couldn't help but give this one 5 out of 5 roses. I absolutely loved it ..." Seduced by a Book

“… perhaps if my pillow were fluffed.”

She looked at him as if he were teasing her, but played along nonetheless, chafing her hands together. “I must have an innate talent for pillow fluffing.”

If one could possess a talent for such a thing, she certainly did not. Not that he would tell her. Because if he did, he already knew the result. She would leave his side, and he would lose the relief—or whatever this was—he found in her presence. And he had never been one to deny himself necessary comforts.

Then, as she had done before, she leaned over him. Her hands went to either side of his face, pressing into the pillow, the inviting plumpness of her breasts resting on his chest. Enjoying the moment, he closed his eyes and drew in a deep breath that hinted at pear blossoms.

She went still. “Why are your hands at my waist?”

Were they? He squeezed his hands and found that, yes, they most definitely were. He also discovered that the satin gown was warm from the heat of her body and fine enough that there was little barrier between his hands and the slender curve of her waist and the slight flare of her hips.

“I’m merely aiding in your efforts by offering stability,” he said, by way of an excuse. Of course, he hadn’t intended to touch her—gentleman’s daughter and all that. Given his pleasure-seeking nature, however, he wasn’t entirely surprised by his wayward hands. Perhaps he should think about removing them before he found them cupped around her breasts. Inadvertently, of course.

“Afraid that I will crush you?” she said with a laugh against his lips. “Well, do not worry, because I have finished. Your pillow is sufficiently plump.”

More than. And lumpy as well, but he did not mind in the least.