The genre-istas at Romancing the Genres asked me to tell them about the beginning of my new series, The Season’s Original. Just in case you missed my post, or are curious about how I began writing THE DEBUTANTE IS MINE, here is the scoop:

For fans of Regency romance, we know that the Season is when society’s elite come out to play. It’s time for debutantes to snag husbands. And time for dukes, earls, marquesses, and viscounts to surrender a roguish lifestyle in favor of loving one woman for the rest of their lives. The idea is enough to inspire a sigh or two. In addition to a book… or three.

THE DEBUTANTE IS MINE is the first full-length book in the series (available 4/12/16). However, the idea for the series sprang from the novella, “The Duke’s Christmas Wish” in the ALL I WANT FOR CHRISTMAS IS A DUKE anthology (12/1/15: Avon Impulse). In the novella, we first meet Lilah Appleton and Jack Marlowe.

Lilah is a worrier by nature, and for good reason. She’s racing against the passing calendar days, knowing she must find a husband by the end of the Season or suffer a dire fate. In the novella, her friend, Ivy, tries to help her win the heart of the Duke of Vale. But that doesn’t happen. Ivy falls for the duke, instead. Then where does this leave Lilah?

Still in desperate need of a husband.

This is where we meet Jack Marlowe, our most unlikely hero. In the novella, the Duke of Vale asks for his assistance.

From “The Duke’s Christmas Wish”:

“Do me a favor, Marlowe? When you’re back in London, send a bouquet of flowers to Miss Lilah Appleton. I wrote her street on this card.”

Marlowe took the card and flashed a smile. “Is she my Christmas present?”

“No, and I only want you to send her flowers. Just the once, and make no other contact with her. Besides, she is far different from the type of woman you prefer. She is respectable.”

Marlowe made a sour face. “Then why are you bothering with the flowers?”

“You are sending the flowers,” North corrected. “And the reason for that is because I promised her friend that I would do whatever I could for her.”

“You have me intrigued.”

“No, Marlowe, I absolutely forbid you to be intrigued…”

As the saying goes, however, there is nothing more tempting than forbidden fruit.

Jack’s curiosity leads us to THE DEBUTANTE IS MINE, where he first meets Lilah. Already, he ignores Vale’s wishes by not sending the flowers, but delivering them in person. And while Jack might remain intrigued by the mystery of Miss Lilah Appleton, sadly our heroine does not feel the same.

She must marry a man with a title, and Jack is not such a man. In fact, he abhors the aristocracy. Nonetheless, he feels it is his duty to help her find a husband. And thus, their story begins. 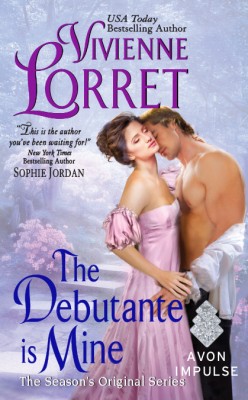 Since this book is the first in a series, you might wonder why I chose to call it The Season’s Original. Well, I’ll let Lilah explain in this exclusive sneak peek of THE DEBUTANTE IS MINE:

“I’m not certain I understand. What is an Original?” Jack asked, shifting to direct his question to Lilah, as if she were the only one in the room. “Another bit of nonsense for the highborn?”

She stiffened as he draped one arm over the back of his chair. He sat in a sprawled manner that seemed to take up every inch of space in front of her. There was no way to look anywhere but at him. His thigh swept near hers again, but she held her ground. This time, his eyes appeared darker, as if his pupils were made of treacle that slowly seeped into the golden brown. Along his jaw, she noted the shadow of whiskers that hinted at a darker shade than his blonde mane. And his mouth—even that arrogant tilt at one corner—was beginning to intrigue her.

Obviously, she wasn’t thinking clearly. She was irritated, she reminded herself.

Taking the example of the women in her family, she attempted to gather her composure on a breath, and then she cleared her throat. “An Original is a person who possesses qualities that make her or him stand above all the rest. An anonymous committee of the ton’s elite selects this person at the conclusion of the Season’s first month.”

In a nutshell, The Season’s Original series revolves around who will be named the Original. You’ll have to read the series to find out the answer. 😉