My Starbucks hired a new barista named Delaney. Secretly, I wanted her to write her own name on my cup. But then I would have had to order another tea for myself, then explain that I was bringing the first one home for a fictional character and… that might have seemed a tad crazy. 😉 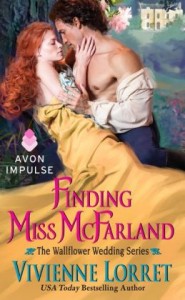 Delaney McFarland is on the hunt for a husband—preferably one who needs her embarrassingly large dowry more than a dutiful wife. After the unspeakable incident at her debut, Delaney knows marrying for love is off the table, but a marriage of convenience—one that leaves her free to live the life she chooses—is the next best thing, never mind what that arrogant, devilishly handsome Mr. Croft thinks. Delaney plans to marry for money … or not at all.

Ever since the fiery redhead burst into his life—in a most memorable way—Griffin Croft hasn’t been able to get Miss McFarland out of his mind. Now, with the maddening woman determined to hand over her fortune to a rake, Griffin knows he must step in. He must help her. He must not kiss her. But when Griffin’s noble intentions flee in a moment of unexpected passion, his true course becomes clear: tame Delaney’s wild heart and save her from a fate worse than death … a life without love.