I am beyond excited to know that THE DEVILISH MR. DANVERS made the list of “favorite spinster historical romance stories” from Tanya at Heroes and Heartbreakers! It’s such an honor to be listed with so many awe-inspiring authors. I’m feeling blessed. <3
GIRL POWER

Persuaded to wed a spinster?

Spinster (noun): A woman beyond the typical age of marrying with little likelihood to do so.A crueler name disguised in polite society could not have been created for our historical romance heroines. Yet, the spinster trope is a beloved favorite. Why? Because these are the women that have either chosen spinsterhood because they are strong and independent women who don’t need a man to complete them, or their beauty hasn’t had an opportunity to shine. And I always like to root for the underdog or read about the impossible HEA waiting to unravel. Finally, these spinster courtships have been some of the most memorable, whether it is due to the spinster’s wit or the bottled up passion waiting to be unleashed.

Below is a list of some of my favorite spinster historical romance stories in alphabetical order by author.

Is any list of spinsters complete without our beloved Anne Elliot? After being persuaded to break her engagement to naval officer, Frederick Wentworth, Anne gets another chance at love. Eight years later, and a life-time of regret, Anne comes face to face with her former fiancé, now a successful and respected Captain. What ensues is a masterpiece in second chances, courtship, and chemistry.

A Good Rogue is Hard to Find by Kelly Bowen

Kelly Bowen’s A Good Rogue is Hard to FindMiss Jenna Hughes has resigned herself to singledom. In fact, she would like nothing more than to remain the companion to the eccentric Dowager Duchess of Worth. Because Jenna is no ordinary companion. She and the duchess are intent on righting the ton’s wrongs by redistributing wealth from the rich to the poor. The poor being shopkeepers and merchants forced into bankruptcy when the ton refuses to deliver payment for services already rendered. Only Jenna does not anticipate the Dowager’s son, William Somerhall, Duke of Worth, to meddle in their affairs, nor to win her heart. Banter and chemistry are at an all-time high with this gem.

The sixth book in the Maiden Lane series, Hoyt takes us back to London of the 1700s. Artemis Greaves is a lady’s companion to her beautiful, yet witless cousin, Penelope. At 28, Artemis is well resigned to the ranks of spinsterhood, in part due to the injustice handed to her twin brother when he was imprisoned in Bedlam for a crime he didn’t commit. When her cousin sets her eyes on Maximus Batten, Duke of Wakefield, aka one of the Ghosts of St. Giles, Artemis finds herself consumed by his attentions and their forbidden affair. And Maximus finds he can no longer hide his true affections, as Artemis melts his hardened exterior.

Before I get a verbal flogging for not including Devil in Winter, let me just say that I love that book as well. And it is the quintessential spinster/rogue novel. However, I want to give a shout out to one of her other series, the Hathaways. And Married by Morning has to be my favorite. Catherine Marks, a paid companion to the younger Hathaway sisters, makes a place for herself in this quirky family fallen into aristocracy through an inheritance from a distant relative. More importantly, Catherine has safety and protection. All is well with the family, save the male heir to the Ramsay estate, Leo Hathaway. Hidden beneath their constant bickering is an attraction that will have readers swooning and falling in love with one of my most favorite historical romance couples.

The second in the Rakes of Fallow Hall series, the Devilish Mr. Danvers is set for release April 21.  After Rafe Danvers was left at the altar by his fiancée, Ursa Sinclair, he vows never to marry again, lest he be made a fool twice. Hedley Sinclair, younger sister to Ursa, and the family’s dark secret, finally has a chance to realize her independence. No longer confined to the attic of her mother’s home after inheriting Greyson Park from her grandfather, she sets out to make the most of her home, regardless of the fact that is in ruins. The only problem is that Rafe Danvers also owns Greyson Park. What starts out as a battle for the property turns into a battle of the heart. And this is Lorret’s finest thus far.

A Rogue by Any Other Name by Sarah MacLean

Sarah MacLean’s A Rogue by Any Other NameLet me start out by saying that Nine Rules to Break While Romancing a Rake is my most treasured spinster novel. However, I wanted to give kudos to another most excellent spinster novel from her Rules of Scoundrel Series. After Lady Penelope Marbury faced a broken engagement from Simon Pearson, the Duke of Disdain (whom I’ve now renamed the Duke of Dreamy), Penelope finds herself quite on the shelf. That is, until she is forced into an unlikely courtship with none other than her childhood friend, Michael, Marquess of Bourne. Only the years have hardened Michael and it will take a woman as spirited and spectacular as Penelope to uncover the true Michael she once loved.

Formerly The Rake and the Reformer, this RITA winning novel tugs at the heartstrings. Reginald Davenport, once the heir apparent to an earldom, now a veritable rake and drunkard, is offered one final chance of redemption. When the new Earl of Margrave decides to give Davenport an unentailed property, Strickland, Reginald sets out to return to the place he once called home. Now thriving under the stewardship of an A. E. Weston, imagine his surprise when he learns that his steward is none other than Lady Alys Weston. Reggie and Alys begin an unlikely friendship that blossoms into much more as they begin to heal from their pasts.

Julia Quinn’s The Viscount Who Loved Me

Ack, this was a toss-up between Kate’s story and Penelope Featherington’s from Romancing Mister Bridgerton. Anthony Bridgerton, Viscount and head of the Bridgertons has finally decided to marry. And he chooses none other than Edwina Sheffied, the incomparable of the season. The only thing, or person, standing in his way is Edwina’s sister, Kate. And once they begin their sparring dance, the pall mall balls fly and love conquers all fears.

What are your favorite Spinster novels?

Learn more about or order a copy of the books mentioned in this post:

Tanya is a fanatic of all things romance and teaches sociology part time. You can follow her on twitter @tamushamu.

To celebrate the release of THE ELUSIVE LORD EVERHART, I’m giving away a $25 Amazon Gift Card to one lucky winner!

The winner will be announced next week. Good luck!

This week has been HUGE: THE ELUSIVE LORD EVERHART came out on Tuesday, the Tasty Book Tour came to an end, and I have a new website! And all this happened while I was away. The internet is a wonderful thing. You can take your office anywhere. 🙂

My family flew to Arizona for Spring Break. We hiked, toured the Grand Canyon, and drove through the Sedona Mountains. It was an amazing place to visit, and the warm temperatures were divine. And then… we flew home to a flurry of lake effect snow and 19 degrees.  Brrrr!!! However, cold or not, it’s always good to come home.  <3 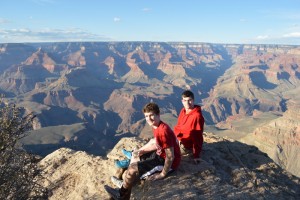 I absolutely love the new look: the sage and the purple, the pop of color in the flowers, the book, and (of course) the tea!

I give the credit to Emily at Swank Web Design. She does amazing work, don’t you think?

THE ELUSIVE LORD EVERHART is out!!! I’m so excited! This has been an amazing week and I’m thankful for each and every one of you for all your support. I feel blessed.

Check here or on my Facebook page next week for a little giveaway I’m having to celebrate and to express my gratitude. <3

The first two covers for THE RAKES OF FALLOW HALL SERIES are stunning!!! I absolutely adore the Avon art department! And I feel incredibly blessed by the amazing team of people who work with me. LOVE, love, love them!

I bid a fond farewell to an amazing 2014–the year THE WALLFLOWER WEDDING SERIES came out, the year I hit the USA TODAY Bestseller’s List, the year I signed a contract for another Regency Era series with Avon Impulse, and the year I met my agent. 2014 has been very good to me and I’ve been blessed in so many ways. <3

Yet, I’m so excited about 2015, too!!! THE RAKES OF FALLOW HALL SERIES will be coming out soon!!! I’m currently in stages of either writing or editing . As I work on them, each book becomes my new favorite, each hero becomes my new obsession. What can I say? I love rakes. 😀 I hope you will, too.

The Avon art department is full of incredibly talented people. Proof of this is the cover for THE ELUSIVE LORD EVERHART. They’ve really outdone themselves this time. What do you think?

Wishing you a year full of joy, love, and great books!

I’m so excited that the 3rd book in the Wallflower Wedding Series is out today! To celebrate, I’m hosting a giveaway on my Facebook page today thru Thursday 8/7/14. One winner will be announced on Friday. 😀

Also, FINDING MISS McFARLAND is on tour this month with Tasty Books Blog Tour. Follow the links to check out reviews, interviews, and enter a contest sponsored by Avon Impulse for a free digital copy of both DARING MISS DANVERS and WINNING MISS WAKEFIELD.

I’m so thankful and beyond excited about the popularity of Winning Miss Wakefield! My gratitude goes out to the amazing team at Avon/HarperCollins and to all my readers who made this dream-come-true possible.